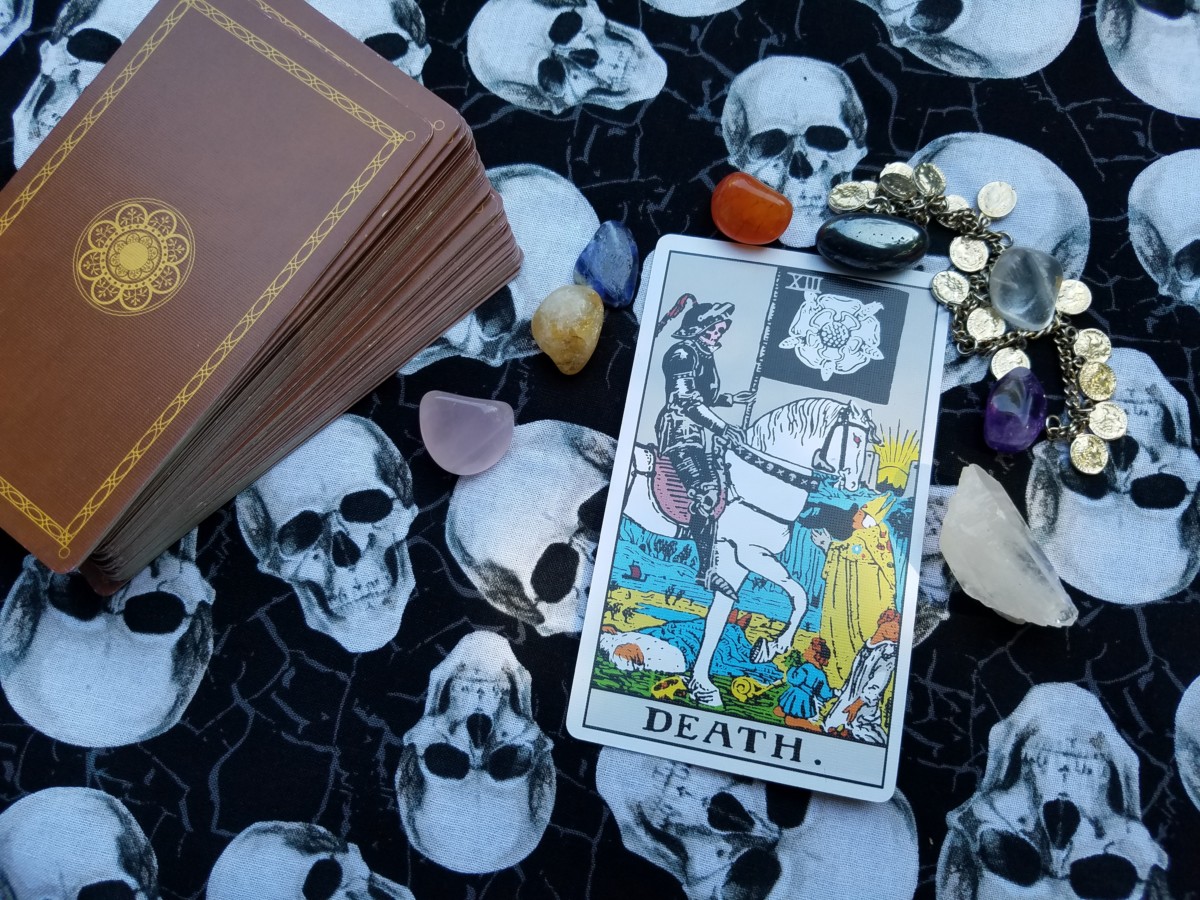 What do I need to know or focus on today?

The death card is one of the most feared cards in the tarot, and is frequently used in movies or TV to indicate a literal death. I think the majority of tarot readers would tell you that your imminent demise is highly unlikely, but that doesn’t stop death from filling us with a sense of impending doom. If I’m not dying, then what is?

Death rides in on a pale horse carrying a black flag. The flag has the number 13, because this is the thirteenth card of the major arcana, and a Rosicrucian rose representing the four elements and the human spirit. It’s not unlike Captain Planet– Earth, Fire, Wind, Water, Heart- GO PLANET! Except death has dominion over all of these elements. Death comes for us all, and we all greet death in different ways just like the people in the card.

The king is dead. The child looks at death with curiosity, the woman turns away in grief, and the bishop welcomes death’s inevitability with open arms. Death’s skull represents something permanent that is coming for us. In the distance, and I am just now noticing this myself, are the towers we see in the moon card. Those towers represent our fears, not unlike the actual tower card, and death can be a pretty terrifying.

Let’s talk about you!

Death is inevitable. Transformation and change are coming and they cannot be stopped. You cannot control the situation, but you are in control of how you handle it. Some will resist death. You may even find yourself going through the 5 stages of grief. But I urge you to not fear the end that death represents because sometimes we need to let parts of ourselves go to grow as human beings. It might be painful, but you’ll be better for it.

A lot of tarot readers don’t read for themselves after a while because of scary cards like death. I’ll admit I was a little anxious when I pulled it today because it’s hard not to be! Look at it! What’s ending? Is it Veil and Vow? But I’ve barely started!

Except I kinda did. So I drew three clarifier cards to figure out what was ending/transforming for me.

Without going too deep into this mini reading, the thing that’s transforming is me and how I handle conflicts with my husband. We had a fight about the right way to handle the blog. Here’s a quick breakdown of the other cards:

“But, Allison,” I hear you say, “that’s not some huge life-altering change. Just communicate with each other!”

Communicating our wants and needs can be difficult, especially when two people are stubborn. He yells when he’s frustrated, and I make snide remarks to cut the tension because they make me laugh. We’ve been together for a long time, but I’m such a people pleaser that I’ve silenced my voice over the years because conflict is uncomfortable and to be avoided. Let’s just all be happy! Even at the expense of my own happiness. But that doesn’t serve me, does it? I need to grow as a human being. It might not seem like a life-altering change, but I’m working harder to speak up, and meet conflict head on. I’m transforming and I’m better for it. We’re better for it.