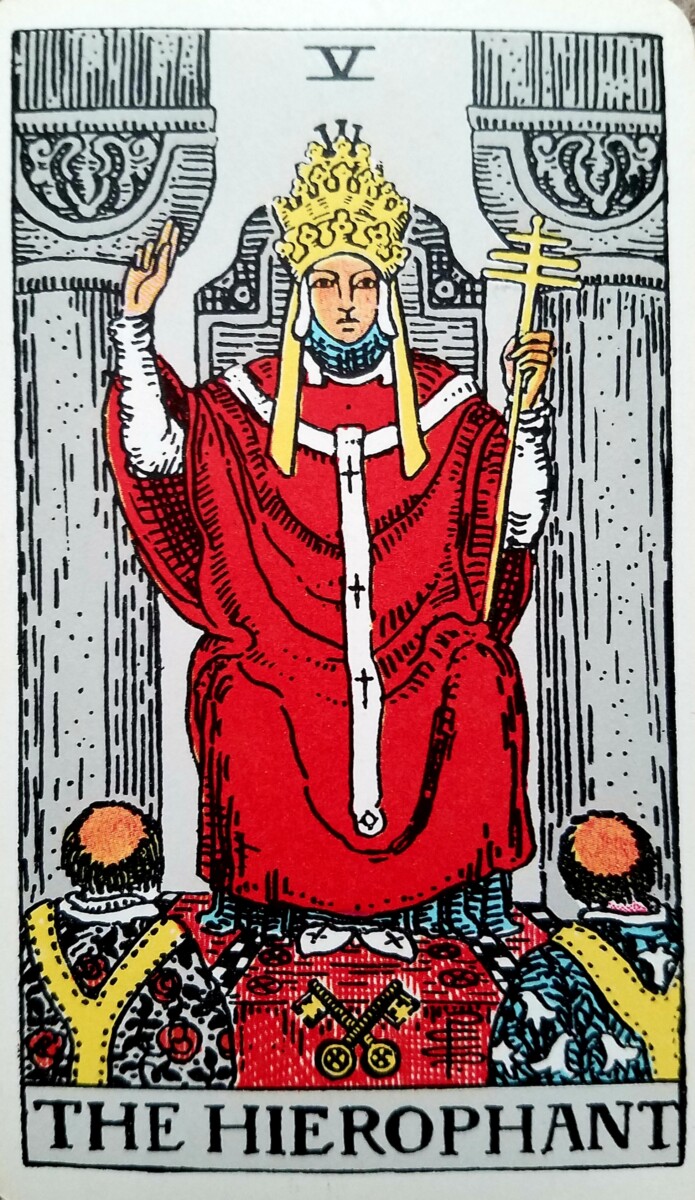 Let me just start by saying that my philosophy on tarot readings is that they’re projective, rather than predictive. The cards show where energy is heading, and much like the line from Terminator 2, I believe “there is no fate but what you make for yourself.” That being said, my tarot mentor Theresa Reed (The Tarot Lady), has encouraged readers to put their predictions out there. Don’t worry about being wrong. You’re only human, it’s going to happen sometimes! Be bold.
(Theresa doesn’t know she’s my mentor. She doesn’t know I exist, but she’s awesome).

In the days preceding the election, and on election day, I asked my deck what I needed to know about the outcome. Where was the country’s energy heading? How were things going to play out? I, like many Americans, was incredibly anxious and was looking for something hopeful on the horizon.

On November 1st I drew The Emperor reversed, the three of wands reversed, and then the queen of cups. The Emperor as an upright energy is logic, structure, order, and authority. This is a planner, someone who defends the realm and is vital and strong. This is the father figure of the tarot! But as a reversal, this represents ineffectual, weak leadership, and at its worst, absolute tyranny. (We’re in the year of The Emperor, by the way).

The three of wands is a card of expansion, growth, and momentum. It represents looking at your work with confidence and wanting to do more, but when reversed, it is delays and frustrations. It can even mean going back to the drawing board because your plans didn’t work out.

The queen of cups stood out in stark contrast to the preceding cards. She is a loving, nurturing, compassionate energy who is in tune with her intuition. She is kindness and empathy, and can even represent healers and counselors. If there’s anything America needs moving forward, it’s that energy.

I instantly saw this spread as those in power throwing temper tantrums about delayed election results. I knew we wouldn’t know who won the presidency on election night, but I was hopeful with the queen of cups in the reading. It felt like we would be moving toward more stability, particularly emotional stability. Healing is something we’re going to need, and we’ll see that even more in my election day Celtic Cross later.

On Monday November 2nd the energy was even more intense. I drew Death reversed, the Devil reversed, and the Lovers. Wow. All major cards, but we’re looking at major energies.

Death is unstoppable change. Death is transformation and transition and what matters about this card is how you greet the changes in your life. As a reversal this read as both delayed change, but also an extreme resistance to change. People resist change because it’s uncomfortable. Sound familiar?

The Devil at its best is temptation and play- a little kinky. But usually the devil represents oppression, obsession, addiction, and the shadow self. Sometimes people stick with the devil they know, rather than make changes and head toward the devil they don’t. We can get comfortable with people who are terrible for us because at least we know what to expect. Change is uncomfortable, and humans hate discomfort. As a reversal, this is almost always throwing off the chains of oppression. I saw this as extremely positive.

The Lovers is a card of harmony, choices, unity, and balance. It is coming together and it felt like healing energy. Even my husband, without knowing what the reading was for, was able to see that something was coming to an end and that it was going to be for the better.

Election day came and I needed the depth of the Celtic Cross to see all the details that were coming. I also wound up with three jumpers which are off to the side in the picture. I won’t go card by card with deep meanings, but I will tell you my overall impressions.

The spread itself seemed positive. I didn’t see any of the classic cards of conflict or doom and gloom. I will point out that the six of pentacles is a card of charity, but it’s also a card of social justice, and I know it’s something many of us are thinking about. The reversal felt like people were worried, especially when paired with the Star reversed which can indicate despair. People would be on pins and needles all day (and now we know, for multiple days after).

Notice the three of wands reversed in the advice position of the spread? Tarot deals with energy and when we’re in the same energy, we see the same cards. It didn’t surprise me at all to see it again. We were going to have delayed results, and we’d have to be patient. This was emphasized by the major energy of the hanged man as our obstacle- pause, waiting, sacrifice, new perspectives.

The seven of cups reversed indicated fears of illusions- are we making the right choices and are they in alignment with our values? A huge portion of the country dealt with those questions, and anxiety has been incredibly high. This is exhausting. The queen of wands, two of wands, and the eight of pentacles indicated the amount of courage, planning, and work that’s ahead for the American people. There is so much to do.

I am encouraged by the jumpers. The Fool is the beginning of a new journey, and the nine of cups is the traditional wish fulfillment card, so one side was going to be very happy. Because of the Fool, I suspected it would be the democrats, but I would caution democrats that extreme smugness will not be helpful when we know healing is needed. On top of that we had the eight of cups which is a bummer because it is a card of “there is nothing left for me here”. It indicated it was time to walk away, and that would be a disappointing walk for someone. Notice the red cloak? Sometimes the tarot can be pretty literal. We’ll see.

Now, this is just my interpretation of three readings. It’s still possible I’ll be completely wrong, but we have seen delays, we’ve seen resistance to change, and we’re all going to have to be patient as we wait for recounts. In 2016 I woke up in the middle of the night, and before I even knew the results, I could feel extreme dread in the air. I was a Jedi feeling a disturbance in the force. On November 4th when I woke, I did not have that same feeling. Have I worried? Yes. Have I doom scrolled? Absolutely. But soon, it will be over, and the real work of bridging gaps and healing will begin.

One final thought. I mentioned earlier that we are in the year of The Emperor. Next year we’re moving into the year of the Hierophant. At its best the Hierophant is tradition, education, and doing things “the right way” because that’s the way it has always been done. The Hierophant also represents institutions like governments. The shadow side of the Hierophant is groupthink and religious zealotry. Real abuse of power energy. I think we’re returning, slowly, from the brink of that shadow.