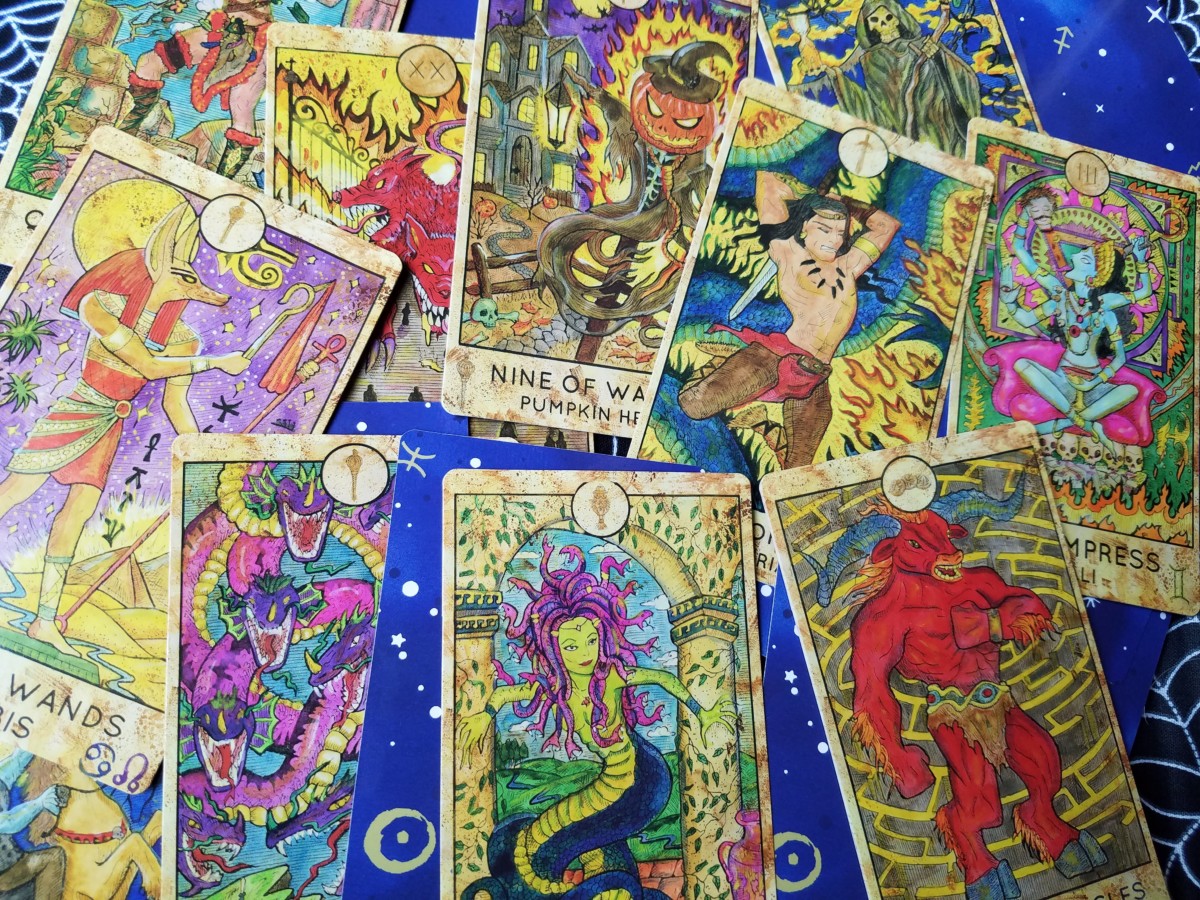 Visiting Spirit Halloween is definitely and October tradition for me. I like meandering around looking at the popular costumes for the year, and checking out props, masks, and weapons. My absolute favorite section is the small home goods display at the front of most Spirit Halloween stores. I can pick up all my spooky home decor needs like dish towels, table runners, and black magic fleece blankets. I like to be warm when I’m casting spells! 😉 The big find for me this year was the Spirit Halloween Tarot deck.

I’m pretty sure the Spirit Halloween tarot deck actually debuted in 2018, but this was the first time I’d ever seen it. As a tarot reader, I’ve started collecting decks to review and at $7.99 this deck is a steal! It is a full 78 card deck and is comprised of mythical creatures and spooky scenes. The cards came randomized, so I put the entire deck in order to make sure no cards were missing. We were good to go.

You can tell the artist spent time picking creatures to align with the card or suit meanings. Some of those choices are bizarre. There is no little white book to go with the Spirit Halloween tarot deck, so understanding what the artist was thinking is purely speculative. I contacted Spirit Halloween customer service twice asking who the artist was in hopes that I’d be able to interview them and discuss their process, but they never got back to me. Oh well, the review must go on!

The major arcana cards are probably the best thought out in the whole deck. I went through each one and was able to loosely connect the creature with the traditional card meanings with only a few exceptions. It was interesting to see that the Spirit deck went with the original Marseilles tarot placements for justice and strength, rather than the Rider-Waite-Smith placements, so don’t think your deck is misprinted if you’re more familiar with Rider-Waite-Smith.

This deck does a pretty solid job trying to keep with the themes of fire, water, air, and earth for the suits wands, cups, swords, and pentacles. The swords have the most bizarre mythical creature choices, some of which are featured below, while the wands and cups have the best. I think my only complaint is that many of the monsters don’t fit with the meanings of the cards, but what do you want? It’s just a fun deck and it will keep your reading sharp since you won’t be able to rely on the traditional images to help you read.

The Spirit Halloween tarot deck is well done and super fun. I’m spending way too much time trying to puzzle out why each monster was chosen for its card, but I’m enjoying it. I think it might even be fun to create deck specific light and shadow meanings for each card based on the mythical being. I fully realize that would change the card meanings- but hey- tarot is supposed to be fun. Go buy this deck!